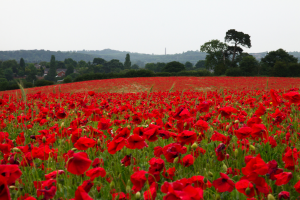 Flowers can say so much without a single word. Each flower has its own character and inspires unique emotions. In this case, a flower is used to remember. Every year millions of people throughout Canada, America and the United Kingdom wear poppy pins during the week leading up to November 11. Schools, workplaces, stores and veterans’ organizations distribute the poppies, reminding people of their significance. As we carry the red flower on our chest everywhere we go, a solemn pride fills the air and we remember.

In World War I and many wars since, courageous soldiers made the ultimate sacrifice so the rest of us wouldn’t have to. Today we wear poppies to send a message both to ourselves and to the memory of those soldiers: we remember and honour that sacrifice.

But why the poppy? What made this pretty red flower the symbol of Remembrance Day? It was a Canadian who first connected poppies to remembering the fallen, but it was the efforts of multiple countries that created the poppy tradition we practice today. An international tradition for an international message, using the international language of a flower.

The poppy began its role as a symbol of remembrance with the World War I poem In Flanders Fields. Canadian war physician John McCrae wrote it in 1915 during the Second Battle of Ypres, Flanders, just after he lost a friend on the battlefield. While overseeing his friend’s burial, McCrae noticed the numerous red flowers growing rapidly among the graves of his fallen comrades. This led to the poem’s first two lines:

In Flanders Fields the poppies blow. / Between the crosses, row on row.

In Flanders Fields was later published by the UK magazine Punch, spreading McCrae’s captivating words throughout the western world. In 1918, American professor Moina Michael was inspired by the poem to wear a poppy in tribute to both dead and surviving veterans. 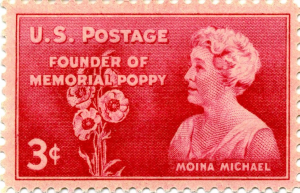 Not only was she the first to wear a poppy, she was the first to make and distribute artificial red flowers for others to wear. Michael also inspired French woman Anna E Guerin to start the first business selling remembrance poppies.

With the Remembrance Day poppy beginning to spread, it wasn’t long before official veteran organizations adopted it. In America the National American Legion declared the poppy their official symbol of remembrance in 1920, while in 1922 the Veterans of Foreign Wars distributed poppies nation-wide for the first time.

In Canada the Great War Veterans’ Association officially recognized the poppy as a symbol of remembrance in 1921. After becoming the Royal Canadian Legion, they went on to create the formal style of wearing a poppy (on the left lapel, close to your heart) and, with Parliament’s help, trademarked the poppy as a sacred Canadian symbol of remembrance in 1948, cementing its use as an everlasting tradition in Canada. 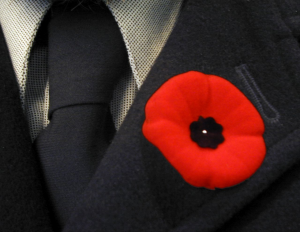 The poppy tradition started with red flowers and one man’s poem. That poem asked the people to hold the soldiers’ torch high. Nearly a century later, our respect for our soldiers keeps burning strong. Whether November 11 is called Remembrance Day, Armistice Day or Veterans’ Day, western nations have worn the red flowers year after year. Every time we do, we thank those brave souls for their sacrifice and promise them that their names and deeds will live forever. It’s a tradition we invented together, to send a message of a respect and debt we all share.